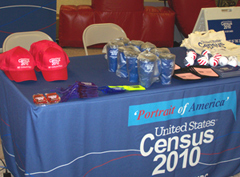 Census workers are traveling across Iowa and neighboring states handing out information and gifts trying to raise awareness of the upcoming count.

Sydnee Chattin-Reynolds, the deputy director of the census region that includes Iowa, was one of several census workers who were at a Des Moines mall this past weekend handing out baseball caps, coffee cups, mouse pads and other items emblazoned with the census website.

It’s all part of what they call their road tour. Chattin-Reynolds says they plan several other stops in Iowa and surrounding stands in the weeks heading up to the first mailing of the census forms the week of March 17th through the 19th.

She says they are going throughout communities across the United States trying to raise awareness of the importance of filling out the census forms when they come out in about a month. Chattin-Reynolds says they are also still looking for workers to help with the count. 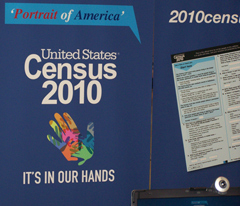 Some of the people who accepted the gifts from the census workers at the Des Moines mall said they knew about the census already, while others said they did not. Chattin-Reynolds says they’re trying to stress that the count is important to everyone.

She says a lot of people will say they don’t use federal funds, but if you drive on roads, federal funds are used to build and repair those roads. She says federal funds are also important to school districts. Chattin-Reynolds says millions of federal dollars are sent to states every year based on the population figures determined by the census.

Find out when census workers will be on tour in your town here:  “2010census.gov“.