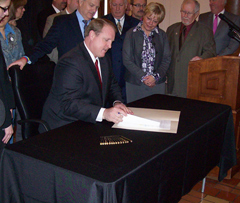 Governor Culver has signed a bill into law which extends new incentives to long-time state workers who retire early.

A  bonus of up to $25,000, based on years of employment with the state, along with five years of health care coverage are being offered in hopes of getting over a thousand executive branch workers to retire.

“First, it thanks and rewards Iowans who have faithfully served the citizens of our great state,” Walton says. “It’s a fitting tribute to their long-standing service, often in tasks that aren’t glamorous, but that are critical to the success of making our state a wonderful place to live.”

According to Walton, there may be a “large turnover” in staff as a result. “While we will miss the talents and skills of those who choose to accept this offer of retirement, some of those newly-vacated positions will be refilled by those with fresh, new, innovative ideas,” Walton says. “This is an important time to embrace those ideas. It’s an important time for our state to have those new, fresh, innovative looks at solving the challenges that are before us.”

Governor Culver says as much as 60-million dollars may be saved as long-time workers choose to retire, some of whom won’t be replaced.

Danny Homan is president of AFSCME Council 61, the union which represents the largest share of executive branch workers.Homan calls the legislation a “win-win” for many state employees — beyond those who may retire.