You are here: Home / Sports / Dwight goes with old QB in Superbowl 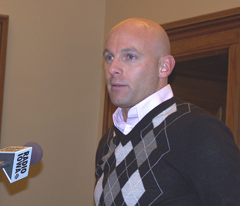 Former Iowa football player Tim Dwight had connections to both teams in the recent Superbowl, with former Hawkeyes playing for Indianapolis, and his former San Diego teammate Drew Brees quarterbacking the Saints. Dwight says he pulled for his former quarterback, despite his loyalty to the Hawkeyes.

Dwight says Drew Brees has waited a long time for the chance, and with Sanders not playing and Dwight Freeney hurt, some of the top defensive players would not be in the game. He says he felt bad not picking the Colts, but had to support Brees.

Dwight says the move from San Diego to New Orleans allowed Brees to take charge. Dwight says Brees puts in the time required to be one of the better quarterbacks in the league, and getting the opportunity to run the show was the thing he wanted and he says that’s why New Orleans made the leap to Superbowl winner.

Dwight is 34 and says he had no desire to return to the game after retiring. He says he understands why another Iowa native, Kurt Warner, decided to retire now. Dwight says Warner got to a point where he had accomplished what he wanted in winning a Superbowl and M-V-P awards and he didn’t want to be in a chair the rest of his life.

“You get to a point where you just have to learn how to put that helmet down man and move on,” Dwight says. Dwight played for five N.F.L. teams, including a Superbowl appearance with the Atlanta Falcons before retiring. He was in Iowa to tout renewable energy as he now owns a solar company in California.