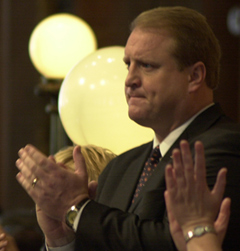 This morning during a news conference at the statehouse, Governor Chet Culver dismissed a handful of reporters’ questions about a weekend poll which indicated Culver faces an uphill battle for reelection. The Des Moines Register’s Iowa Poll found just 36% of those surveyed approve of Culver’s performance in office.

“I’ve never really paid much attention to polls. It’s about getting the job done every day,” Culver said. “And there’s a long time between now and November. Twenty-four hours is a long time in government and in politics.” Culver said he “feels good” about the steps he’s taken as governor, specifically mentioning his I-JOBS program which saw the state borrow millions to bankroll infrastructure projects.

“I want all Iowans to feel good about finding a good-paying job, so this is going take some time for the local folks and individuals to find that job that they’re looking for whether it’s through the I-JOBS program or additional support from the federal government on unemployment compensation,” Culver said.

“I’m not suggesting that Iowans feel good. I know that it’s been very tough on families across the state. That’s why I’m working so hard to do all I can as governor.” Reporters asked Culver six different questions about the “Iowa Poll” that was released this weekend, asking him at one point if he were surprised or disappointed.

Culver stuck to the same answer, that he is “focusing on doing his job” and not paying attention to polls.

Read more about the poll on O.K. Henderson’s blog.