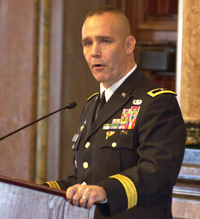 The leader of the Iowa National Guard says his troops are highly motivated, “mission focused” and “warrior ready.”  Brigadier General Timothy Orr delivered the annual “Condition of the Guard” address to Iowa legislators this morning.

“For the last eight years, the Iowa National Guard has been challenged like few times in its history,” Orr said. “And this year is shaping up to be the most challenging yet.”

More than 14,000 Iowa Guardsmen and women have been called to active duty since the September 11th attacks.  The Guard is preparing for the single-largest deployment since World War II as 3,500 soldiers have been called for duty in Afghanistan later this year.

Orr is the 28th man to serve as Adjutant General of the Iowa National Guard. “Ours is a profession of looking forward and anticipating future needs so even as we continue to meet the demands of current deployments and respond to homeland security needs, we must be mindful of the unpredictable nature of a dangerous world,” Orr said. “Whether it is the recent failed attack on the U.S. homeland or the drawdown of forces in Iraq and the build-up in Afghanistan, the situation could change dramatically from what we know today.”

“It’s no small feat to prepare, train, equip, and deploy more than 3,000 soldiers while maintaining our organizational readiness, continue the efforts to prepare trained war fighters for future needs, take care of the needs of our soldiers, Airmen and their families, while providing a robust domestic response capability for Iowa,” Orr said to close his speech. “Yet, depite these incredible challenges, I am confident that the Iowa National Guard will continue to set the example for all states; we will be here for Iowa when they call; and, as a force, we will remain ‘Mission Focused and Warrior Ready!””

Today less than 200 Guard soldiers and airman are deployed overseas, the lowest level of deployment for the Guard since the beginning of the war.  That will soon change when hundreds of Guardsmen and women ship out for Afghanistan.  Orr has taken steps to ensure the Iowa National Guard can respond to disasters here at home, hosting a regional meeting with Guard units for nine Midwester states to discuss “mutual support” in domestic emergencies.

“This meeting resulted in a regional assessment of available manpower and equipment, agreements to support mutual aid requests, and a decision to make this meeting an annual event,” Orr said.  “Additionally, we are training retired Iowa National Guard members to provide expertise in key areas where we may need assistance as a result of the deployment.”

Governor Culver has asked legislators to provide over half a million dollars now to the Guard to prepare for its deployment to Afghanistan and Orr thanked legislators for their past support and asked lawmakers to consider the governor’s request.  Listen to the entire address here: Condition of Guard 31:27 MP3