You are here: Home / Business / ‘Tis “Canada Day” at statehouse 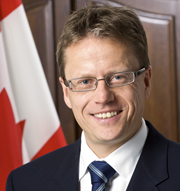 A Canadian diplomat spoke to Iowa legislators this morning on what has now been designed as “Canada Day” at the statehouse.  Consul General Martin Loken is Canada’s top diplomat in the five states of the Upper Midwest.

“You know, in a world that’s so often characterized by divisions, by tension and conflict, I believe that the unique friendship that Canada and the United States enjoy together is very much a model for the world and it’s something that we treasure very deeply,” Loken said this morning.

Senator Daryl Beall of Fort Dodge is a member of the legislature’s International Affairs Committee and he spoke on behalf of the Senate.

“The eyes of the nation, indeed the world, are on the Olympics in Vancouver, British Columbia, but it’s also important to note that the United States and Canada possess a very special and positive relationship every day of the year,” Beall said.  “We are each other’s best trading partner. We share common values and, for the most part, a common language, eh?”

The Iowa House and Senate passed resolutions declaring today as “Canada Day” in the state capitol. Loken delivered a brief address to the state senators and then to the state representatives.

“There’s no other two countries in the world that have a relationship as deep as ours as friends, as neighbors and as allies,” Loken said.

The resolutions passed in the Iowa Senate and House suggest 78,000 jobs in Iowa are dependent on the trade relationship between the U.S. and Canada.

Listen to this morning’s remarks in the Iowa House and Senate below: