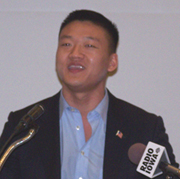 An Army soldier at the forefront of the effort to change the military’s “Don’t ask, don’t tell” policy gave the keynote speech today at the Governor’s Conference on Lesbian, Gay, Bisexual and Transgenger (LGBT) Youth.

Lieutenant Dan Choi is a West Point graduate and Iraq veteran who first announced he was gay during an appearance on a cable TV show.

Choi, who is now in the New York National Guard, has been traveling the country since his revelation and talking about the policy.

“Why is it so poisonous, why is it so damaging? It’s because it forces you to lie about who you are. It says, ‘This is our enforcement of shame. You will be in the closet and that’s an order,'” Choi said. He asked how many in the audience had their own “don’t ask, don’t tell” policy in their churches, families, schools, clubs, fraternities, sororities or “even in our math classes.”

Choi said lying about his sexual orientation went against what he was taught at West Point about not lying. Choi told today’s gathering that it was difficult of tell his mom and dad he is gay. His parents are immigrants from Korea and his dad is a minister. Choi then criticized those who use religion as a reason for their stance against gays.

“There are a lot of people who use their religious sentiments and that is the source of the hatred. I realize that. I was raised in an evangelical background,” Choi says. “I still go to church with my parents. I still believe in God. I don’t think that I should have to give up my religion and my faith because the politicians and the people with a political agenda within those faiths…want to hijack it.”

Choi says one of the main arguments against having gays serve openly in the military is that it will hurt “unit cohesion.” “So what that really means is there’s all these straight people in the military who are just not going to be comfortable with gay people. They can go to Iraq and they can risk their lives and they can be very strong men and women of character, but when they come and see this gay person they’ll say, ‘Oh my God. I can’t deal with this. I’m going to quit.'” Choi said. “That’s what they mean. Really what cohesion means is comfort zone. I know we deal with that a lot here, even in our schools.”

Choi, who is an Arabic interpreter, was reactivated and he asked the students what they though happened after he returned to training with his fellow soldiers, who now know he is gay. The students said “nothing” happened, which prompted this sarcastic response from Choi.

Choi gave this charge to the students, advising them to step forward and stand up for those who are gay — and are being bullied.

“I remind you all, right here, while we’re all here right today, we’re enjoying each others community and company,” Choi said. “There’s somebody out there in third grade and in fourth grade. They’re siting in their math class, their English class. They know they’re gay. They don’t know how to deal with it.”

According to Choi, he would not have been able to serve in the military 60 years ago because he is Asian. Choi asked the students how they would be viewed on the gay issue 60 years from now. Choi says, “Will they look back on us and they’ll say ‘oh my God, really, I cannot believe that you still had problems with homeless youth, people coming out, bullying. I can’t believe that you still had people that couldn’t tell the truth about who they are in order to serve their county. I can’t believe that. What did you do, grandma, grandpa? What did you do?'” Choi said. “They are your children, they are the next generation, and they will ask you that and they will judge you, very harshly.”

Choi is continuing to serve in the military as efforts are underway by the administration to change the “Don’t ask, don’t tell” policy. The conference is underway at Drake University in Des Moines.