You are here: Home / Weather / Roof ice continuing to cause problems for homeowners 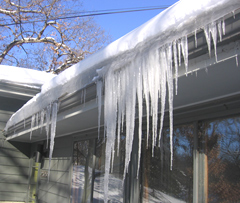 Ice dams like this one are common this winter.

Iowa’s unusually harsh winter is causing problems for homeowners. Record amounts of snow and extended periods of below freezing temperatures have created “ice dams” in gutters and along overhangs. The problem develops as snow melts and flows down to the overhang where it re-freezes on the coldest part of the roof and creates a dam.

Brad Gannon, who owns a roofing company in Des Moines, says that ice and water will eventually back up underneath the shingles.

“People just can’t expect that much snow to sit on their roof and not eventually find a way in (to the home),” Gannon said.

Homeowners who let the snow and ice build up on their roof all winter could face a costly roof repair, plus damage to their walls and insulation.

“When you have your driveway and sidewalks cleaned off, think about having the bottom edge of your roof cleaned off,” Gannon said. A roof rake, available at most hardware stores, is designed to reach the eaves from the ground to remove snow. Gannon says his workers are getting more and more calls to clear ice dams. He says homeowners may be able to chip away at the ice dams on their own by using a hammer or a roofing hatchet.

“You just have to be really careful,” Gannon said. “It’s just like if you’re trying to bust up ice cubes, but they’re abnormally large ice cubes. They will bust, but you have to be careful that you don’t damage the gutters and the shingles.” Gannon says he’s seeing homes this winter that have ice built up six to 10 inches above the gutter.