You are here: Home / Human Interest / Greenfield man in running for title of “America’s Hottest Husband” 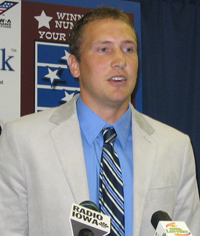 A Greenfield man, known for his annual patriotic artwork on the “Freedom Rock” in northern Adair County, is in the running for the title of “America’s Hottest Husband 2010.” Ray “Bubba” Sorensen was nominated for RedBook magazine contest by his wife Maria.

The nomination process involved a 500-word essay. “I wrote it months and months ago and didn’t tell anyone about it, not even Bubba, because I didn’t want to get my hopes up,” Maria said. “They just contacted me this month and said he was chosen out of thousands of other nominations.”

Twenty-one other men were selected as finalists for the contest. The winner will be sent on an all-expenses paid week-long vacation. The top five vote-getters will also take part in a photo shoot in the magazine. Maria and Ray Sorensen have been married for three years. Maria says she nominated her husband because of his work ethic and patriotism. Ray’s paintings on the Freedom Rock are designed to honor America’s war veterans.

Maria says she’s impressed with her husband’s willingness to stand-up for his views in spite of occasional criticism of his work. Ray Sorensen owns a photography and arts studio in Greenfield. His wife says she also nominated him because he’s a “true romantic,” something that actually shows up in his work.

Maria says in all of Ray’s paintings, he hides a love note only the two of them can see. Maria says she often studies the paintings for hours. “They’re very discrete and no one else can probably see them, but I can always find them,” Maria said. Ray was flattered by the nomination. Maria says when he first read the essay, it brought tears to his eyes. Readers of the magazine will chose the winner – to be announced in mid-March.