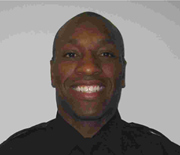 A Des Moines Police officer who was arrested earlier this month on charges of assault with intent to commit sexual abuse and non-felonious misconduct has been fired. Police Chief Judy Bradshaw says Maynard Richardson was informed of the decision this morning.

Bradshaw says the action followed an internal review of the case and recommendations from Richardson’s supervisors. The 35-year-old Richardson is accused of assaulting a 22-year-old woman in the back of his patrol car while on duty and in uniform.

The alleged victim came into contact with Richardson after the officer responded to a fight at an apartment complex at around 3 a.m. on February 5th. The woman reported the incident at 6:30 a.m.

Bradshaw says the internal investigation did not include an additional interview with the victim. “Her statement was very thorough and as command staff looked at it, we didn’t see a need to bring her back in,” Bradshaw said. The woman claims Richardson touched and kissed her in the back of the squad car before driving her home.

Richardson joined the Des Moines Police Department in December of 2008. “It’s not easy to become a police officer and not just anybody can do that. So, I’m really confident in our hiring process,” Bradshaw said. “There are just certain things that a hiring process will not predict. Something like this…you can’t imagine that this would potentially happen.”

Officer Richardson was previously suspended from the force for two days in 2009 for making inappropriate comments to a female citizen. Chief Bradshaw refused to provide more details about that incident, but said she felt Richardson had made amends. “We hadn’t received any other complaints since he served his suspension,” Bradshaw said. “He did indicate remorse about making that former comment and said he was going to turn himself around. He appeared to be doing that.”

Richardson is the third officer dismissed from the Des Moines Police Department in the last year. Two other officers resigned rather than be fired after they were accused of using excessive force during a traffic stop. Bradshaw says the incident involving Richardson has “embarrassed all employees of the police department.” Richardson, who had been on paid leave since February 5, can appeal his termination to the Des Moines Civil Service Commission.

Bradshaw says the decision to fire Richardson was based on the finding that he violated six departmental policies: