A brief ceremony was held in the governor’s formal office today to honor an Iowa native who was killed in Afghanistan last month. Army Captain Daniel Whitten, who was 28 years old, was a 1999 graduate of Johnston High School. Whitten was killed when an improvised explosive device hit his vehicle.

His mother, Jill, spoke at today’s gathering, thanking Iowans for their words of condolence. “I really do appreciate all the recognition for Daniel and his sacrifices that he made, but I do want to remind everyone that all our soldiers are heroes, too. They go out every morning knowing that they’re in a very risky situation and they’re doing that for us,” Jill Whitten said.

“And so we need to make sure that we keep them in our prayers and recognize that each and every one of them is doing their work for us.”

Captain Whitten was a graduate of the United States Military Academy at West Point who was on his third overseas tour of duty. His funeral was held in the chapel at West Point. The Iowa West Point Parents Club presented Jill Whitten with an American flag in a special wooden case. Representative Gary Worthen of Storm Lake has a son who graduated from West Point and he spoke on behalf of the group. 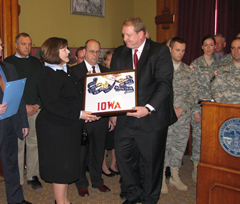 “If there’s any solace in the loss of Daniel it is he that was where he wanted to be — at the point of the spear, leading his men in combat,” Worthen said. “Few men are born warriors. Even fewer are born leaders. Only a handful have been put on this Earth to be heroes. Job well done, Captain Whitten. Be thou at peace.”

Governor Culver presented the soldier’s mother with a framed State of Iowa flag which had been flown over the statehouse on the day of her son’s funeral.

“Certainly as a state we offer our heartfelt condolences to you and to your entire family,” Culver said. Captain Whitten left behind a wife, Starr who is a teacher, and a sister who is in the military, serving in a unit on assignment in Afghanistan. Jill Whitten offered this remembrance of her son.

“Daniel was a wonderful son, a very loving husband, the best brother to his sister, Sarah, that anyone ever could be and he was definitely dedicated to the work of a soldier,” she said. Jill Whitten lives in Grimes and works as a policy specialist in the Iowa Department of Human Services.

(Photo of Culver & Jill Whitten courtesy of the governor’s office.)