An Iowan now holds the distinction as the oldest living American. Neva Morris of Ames is 114 years, 216 days old. A New Hampshire woman who was certified as the oldest person living in the U.S. has died at age 114 years, 294 days.

Morris has lived at Northcrest Community in Ames since 1999. Her son-in-law, 90-year-old Tom Wickersham, also lives at Northcrest and doesn’t believe there’s a secret for living such a long life. “Well, I guess no one really knows except she must have good genes for one thing,” Wickersham said. “She’s just been a well rounded person who’s had a good purpose for living.”

That “purpose” has included four children, eight grandchildren, 19 great grandchildren and several great-great-grandchildren. Morris has not been able to walk for several years and has hearing and eyesight problems, but Wickersham says Neva is aware of the fact she’s become the oldest living American.

“When one of the caregivers told her that, she made some kind of a remark, ‘oh my’ or something to that effect,” Wickersham said. Neva Freed was the youngest of four children and grew up in Ames. She married Edward Morris in 1914. They had four children, one of whom is still living. 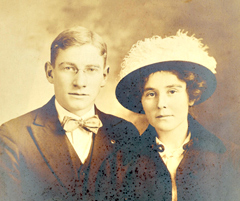 Walter Morris is now in Sioux City. Wickersham says he’s amazed with Neva’s ability to avoid serious health problems. “It’s pretty remarkable when someone lives to be 100, but add 14 years to that…no one could imagine such a thing,” Wickersham said. Neva Morris has enjoyed several “passions” throughout her life – including a love of cars. Wickersham remembers helping Neva purchase her last car, a 1985 Mercury Grand Marquis.

“She just loved that car and was really quite a fast driver,” Wickersham said. “Probably through age 90, she was still going to Des Moines in that car…quite remarkable, she never did have an accident.” To this day, Morris loves to sing. “You Are My Sunshine” is one of her favorite songs.

“She has a favorite song or two and if you sing, she’ll sing right along with you,” Wickersham said. Morris is believed to be the second oldest living person in the world behind a woman from Japan who is 114 years, 301 days old.