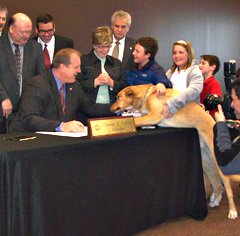 Governor Chet Culver has signed a bill into law that immediately allows for state inspections of commercial dog kennels that draw public complaints.

Breeders who are raising four or more dogs would have to pay a new licensing fee and register with the state. Culver calls that a “seal of approval” which reputable breeders can present to families hoping to adopt a pet.

“Providing assurance to families that the pets they adopt are healthy, clean and have been raised humanely,” Culver said. According to Culver, the “overwhelming majority” of dog breeders, pet stores and animal shelters have “absolutely nothing to fear” from this legislation.

“But to any facility currently operating as a puppy mill or to those who raise companion animals in unhygienic and inhumane settings, now is the time for you to change course or pay the consequences,” Culver said.

Culver’s wife, Mari and his two children brought the family’s dog, Buck, to the bill signing. The family got Buck from the Animal Rescue League of Iowa, which hosted today’s bill signing event. As the governor sat at a table to formally sign the so-called “puppy mill” bill into law, Buck put his paws up on the table and someone in the crowd suggested that the dog put his paw print on the bill alongside the governor’s handwritten signature.

Tom Colvin, executive director of the Animal Rescue League and president of the Iowa Federation of Humane Societies, called today’s bill signing a “fantastic” event for two-legged and four-legged Iowans. “What this bill is basically allowing us to do is to have Iowans employed by Iowa through the Iowa Department of Agriculture, upon complaint, get into the facilities of USDA federally-licensed facilities and ensure that they are not suffering because of inadequate food, water, shelter, veterinary care or grooming,” Colvin said.

Mary LaHay of Iowa Voters for Companion Animals called today’s bill signing ground-breaking. “A fabulous, fabulous thing to see happen to help these many, many dogs that are suffering so seriously,” LaHay said. Critics of the bill had argued the legislation would lead to efforts that restrict hunting and impose new requirements on agricultural operations.