You are here: Home / Education / Students rally at the statehouse over school funding 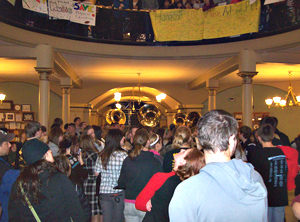 Band students rally at the statehouse.

Over 300 students from about 10 different central Iowa high schools rallied at the statehouse this morning to protest budget cuts at their schools.

Some came with their band instruments, Some of their chants ended with the phrase: “Save the arts!” Sam Hiatt is a sophomore at Des Moines Roosevelt High School.

“We’re trying to support the arts,” Hiatt says. “It’s an important thing.” Hiatt, who plays trombone in Roosevelt’s band, was at the statehouse to protest cuts in elementary school band programs.

“We all feel it was an important part of our development as musicians, so we’re trying to get it back,” he said during a statehouse interview with Radio Iowa. Will Karr, a freshman at Roosevelt, is in the band’s drum line. “It’s great that so many people can come together like this,” Karr said of today’s rally. “I mean, it makes me proud of my state, I would say.” The Des Moines School Board is contemplating laying off about 350 teachers and support staff to deal with a budget shortfall. 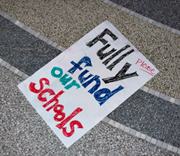 State aid to schools was reduced last fall by 10 percent when Governor Culver ordered an across-the-board cut in the state budget. Legislators have not yet set the level of general state school aid for the academic year that starts in the fall. Last week the Senate’s Democratic leader said schools should tighten their belts just as Iowans have done during the recession.