You are here: Home / Business / Tax collections expected to be down this year, up slightly in next year 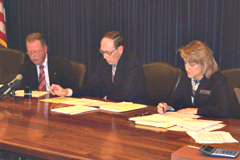 The three-member panel which sets the official estimate of state tax revenue has decided tax collections for the current year will be down about $900,000.

The three-member “Revenue Estimating Conference” projects the state will collect just over $5.4 billion in a variety of taxes for the fiscal year that began July 1st, 2009 and concludes on June 30th.

Legislative Services Agency director Holly Lyons says she hopes she and the other two panel members are wrong about state tax collections and, ultimately, the state of the Iowa economy, but they wanted to err on the conservative side.

“We believe that Iowa may be turning the corner, but we haven’t accelerated and headed out of the turn yet and headed down that long, slow recovery road,” Lyons says.

David Underwood, another member of the Revenue Estimating Conference, is the retired chief financial officer of a company in Mason City that makes metal doors. “Cautious, I guess, is where I’m at,” Underwood says. The three financial experts also pegged state tax collections for the next fiscal year, which begins July 1st.

Their estimate is that the state will collect over $30-million more in taxes next year. That’s an increase of just 0.6 %. According to Underwood, it appears the state’s ag equipment sector is seeing strong sales growth this year and the average work week is increasing for individual workers. Underwood says there’s an expectation that wages, overall, might start to increase sometime in 2011.

“There is some good news on the horizon and it does feel like we’ve, generally speaking, bottomed out,” Underwood says. Legislators have been waiting for this panel to meet and set its estimates of state tax collections. Now, lawmakers can begin the final stages of drafting the state budget for next year.