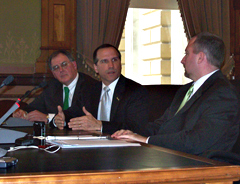 A company that bills itself as “the world’s largest provider of casino entertainment” is offering to pay the State of Iowa millions of dollars, every year, if Iowa lawmakers vote to bring an end greyhound racing in the state.

Harrah’s runs the Horseshoe Casino and connected Bluffs Run dog track in Council Bluffs. Company officials held a news conference at the statehouse today to publicly offer to pay the state $7 million, every year, for as long as Harrah’s operates the Council Bluffs casino.

“That is $7 million a year that can be spent by the state for real issues that affect Iowans like education, jobs and health care as compared to spending this month on a few breeders and owners, many of whom live out of state,” said Dan Real, assistant general manager and vice president of operations for Harrah’s Horseshoe Casino in Council Bluffs.

The state’s two greyhound tracks in Council Bluffs and Dubuque are required to run dog races 301 days a year.  Harrah’s executives says that means races are run and “purses” or cash prizes are awarded to the owners of the top-finishing dogs — with few, if any, customers watching.

“Dog racing in Iowa generates little consumer interest,” Real said.  “It does little for Iowa’s economy and, most importantly, this industry is the recipient of what is in essense a subsidy or bail-out of over $10 million annually.”

A bill that would end greyhound racing in Iowa was debated by a House committee, but the proposal has stalled in the legislature. After criticism, the bill was stripped of the proposal to have Harrah’s — and the track in Dubuque — make a combined, one-time payment to the state of $10 million in exchange for getting rid of greyhound racing.  A lobbyist for the casino company recasts Harrah’s $7 million-a-year payment as a “relicensing fee.”

According to a consulting firm hired by Harrah’s, most of the purses or prizes awarded at the dog tracks go to just 20 breeders.  Real acknowledged kennels would “cry foul” at their proposal. “Our industry and the monies it generates should be about Iowa and benefit Iowans, not a few politically-connected breeders and owners, many of whom don’t even live or do business in our state,” Real said as a he read from a prepared statement.  “It is time to stop this subsidy and put it to a better use.”

A report from the Iowa Greyhound Association suggests the industry has a $41 million impact on the state’s economy every year.  About 10 percent of the greyhounds racing in the United States are from an Iowa kennel.

The top Democrat in the Iowa Senate said Friday on Iowa Public Television that it’s possible legislators may consider a gambling-related bill in the closing days of the 2010 session, but Senate Democratic Leader Mike Gronstal says it’s “a bit of a long shot.”