An Irish politician and his wife who are the honored guests at Emmetsburg’s St. Patrick’s Day celebrations were at the statehouse earlier this morning to say a few words in the Iowa House and Senate. Senator Ned O’Sullivan is a member of the Irish parliament.

“I’m speaking first in Irish or Gaelic, as you would know it, because Madelyn and I come from County Kerry which is one of the few remaining counties in Ireland where the Irish language is spoken fluently by all and where, in some of the remote areas, it’s still the first language of choice,” O’Sullivan said during remarks in the Iowa House.

“I know that many of you are of Irish descent and I know you’re as proud as I am that we’re trying to hold on and struggling to hold on to our native, old, Irish traditional language.” O’Sullivan represents Limerick, the fourth largest city in Ireland. He arrived in Iowa a few days ago.

“We’re farmers ourselves and we love the wide open spaces and the fine, good land we see, a lot of it under snow which we don’t understand so much,” O’Sullivan joked. “But it obviously doesn’t stop you (from) producing some of the best grain in the world.” O’Sullivan spoke for about three minutes, briefly touching on Ireland’s own economic recession, before lauding American-led efforts to end the “long-standing difficulties” in Northern Ireland.

“If I could mention President Bill Clinton whose great work was continued by President George W. Bush and as recently as two weeks ago President Obama had to pick up the phone and ring some of those guys in Belfast and knock their heads together and get ’em back talking together, which they did,” O’Sullivan said, as legislators laughed. “A lot of American dollars have been pumped in to make the peace all the sweeter in the north.”

O’Sullivan noted Emmetsburg, Iowa, is named in honor of the “great” Irish patriot Robert Emmet. “And I know that he would be very proud that America has played such a big part in peace in our land,” O’Sullivan said. The Irish dancers from Emmetsburg made the trip to Des Moines, too, and performed in the statehouse rotunda. 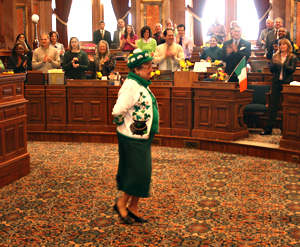 Long-time State Representative Dolores Mertz, a Democrat from Ottosen, danced the jig on the House floor early this morning.

“Well, not too bad for almost an 82 year old, right?” Mertz asked after her performance. She received a standing ovation from her colleagues. Mertz is serving her final year in the legislature and there’ll be a retirement party for her this evening.