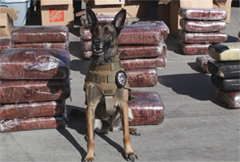 A police dog is getting credit for a big drug bust in Cedar Rapids.  Marco and his handler, officer Al Fear, were conducting a routine check at various businesses this week when Marco “hit” on a garage.

Officers obtained a search warrant and found over 500 pounds of marijuana in the garage.

Police spokesperson Sergeant Cristy Hamblin says the K-9 is trained to sit and wait for a reward when the dog sniffs out illegal drugs.

“Once they make a ‘hit,’ they’ll sit and wait for a reward, which is a tennis ball,” Hamblin explained. “At that point, we’ll make sure to post someone there and we can get a search warrant based on that dog.”

The pot Marco found has an estimated street value of $500,000. No arrests have been made in the case. Police are not disclosing exactly when and where the marijuana was found. “We’re kind of working our way backwards,” Hamblin said. “We found the marijuana. Now we’re going to find who delivered it there and who the proper person is to charge.”