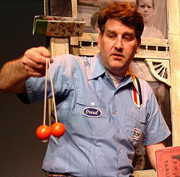 An actor and comedian is performing what he calls a salute to Americana in central Iowa this week. Pat Hazell, one of the original writers on TV’s “Seinfeld,” incorporates iconic Midwestern stories of fruity Jell-o, bad Halloween costumes and terrible family vacations into a one-man show called “The Wonder Bread Years.”

“It’s not my life story but sort of our life story as a generation,” Hazell says. “It isn’t really a plot-driven thing, it’s just a happening, you know? The idea is supposed to be that we try to shoot a bull’s eye into the Baby Boomers’ memories and take them back to that time where — not an age of innocence but sort of before you realize there are things to be afraid of.”

Hazell first appeared on the “Tonight Show with Johnny Carson” in 1989 and has been on with Jay Leno six times. While he’s an Omaha native, Hazell says he built the show around common denominators so that people from California, New York and any other state can relate.

“I don’t mention my age in the show, I don’t actually say I grew up in Omaha,” Hazell says.

“If I stay clear of that stuff, I find that people look at me, hear the content and think, I grew up near them, I’m from their neighborhood, I knew somebody they knew because they trick-or-treated the same route.” Hazell uses slides from his own childhood during the show to prove his points — including snapshots of a Colonel Sanders Halloween costume and a family vacation to the Four Corners. He also incorporates a host of authentic props in his act, including toys from decades past that might be considered health hazards today.

They include Clackers — two large marbles suspended from a string that “clack” and rebound, sometimes taking out teeth — and Jarts, large plastic and metal darts that were thrown in a yard game — which could end in human impalement. “They were both, Jarts and Clackers, were banned by eBay as dangerous objects and it really amused me,” Hazell says. “I went to Yahoo and some guy was selling the stuff, Jarts, with some kind of a disclaimer, just so he wouldn’t get sued for selling projectiles or something.”

The show is at the Civic Center of Greater Des Moines’ Temple Theater through Sunday. For details, visit www.civiccenter.org or www.pathazell.com.