You are here: Home / Business / Northwest Iowa couple SBA Persons of the Year 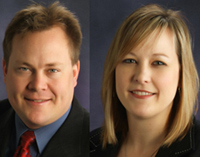 The husband-and-wife owners of a wind energy company in northwest Iowa are being named Iowa’s Small Business Persons of the Year by the U.S. Small Business Administration.

Rob and Tara Lynn Hach opened their venture in the town of Alta  near Storm Lake in 2002 and now have 27 employees at offices in three states. Rob Hach explains what they do.

“We travel around the country and we’re even going international to test for wind in order to determine whether or not a wind farm is feasible for the generation of electricity,” Hach says. The company is called Anemometry Specialists. Anemometry is the study of wind. The 34-year-old Hach says it’s a big honor to win the award from the S.B.A. and he says they’ve worked hard to get where they are.

“We’ve had some really nice growth over the last five years,” Hach says. “We were even able to grow in the recession last year. We have a very family-friendly environment. Our crews, our technicians are on the road and we try to make sure they’re home for their Christmas pageant, for their son or daughter’s birthdays. We care a lot for our employees.” Since wind energy is what the company’s all about, you’d think the headquarters would have a giant wind turbine out back that powers the operation. Well, not exactly, Hach says.

“No turbine is powering the building,” he says. “We have a couple little ones inside the building but there are approximately 500 turbines north and south of us. So you go out the door and see three different wind farms around our building.” Wind is a family affair for the Hachs. He says his father first got the wind energy bug during the oil crisis of the mid 1970s.

Hach has five siblings and three of them are also involved in harnessing the wind. Anemometry Specialists has offices in Iowa, Texas and New Mexico with plans to expand into the Northwest and Northeastern U.S. in the coming months. The Hachs will represent Iowa at the National Small Business Week ceremonies in Washington, D.C., in May, where they will compete for the National Award.