You are here: Home / Sports / UNI set to practice in St. Louis for Friday’s game 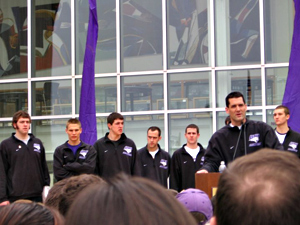 The U.N.I. basketball team will practice later today in St. Louis as they get ready for tomorrow night’s Midwest Regional semifinal round contest against Michigan State.

The Panthers have been the talk of the nation ever since they beat top ranked Kansas in last Saturday’s second round but junior guard Kwadzo Ahelegbe says it is time to focus on the next challenge.

Ahelegbe says you have to stay focused because they have to face the Spartans in the next game as he says Michigan State doesn’t care who they are, so they have to be ready to play the game. The Panthers hope to continue a run of success in St. Louis where they have won the last two Missouri Valley Conference tournaments.

He says they love St. Louis and with native Anthony James, they know a lot about the town. Ahelegbe says playing there won’t help them jump higher or shoot better, but it does give them a mental boost. The first game on Friday night in the Edward Jones Dome will pit Tennessee against Ohio State.