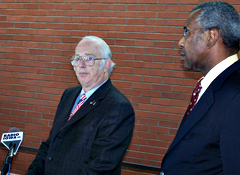 The Iowa Association of School Boards (IASB) has fired executive director Maxine Kilcrease in the wake of the investigation of her alleged mishandling of the associations funds.

“We believe this to be in the best interest of the association. As a board we feel we were misled and blocked form information and it has caused a huge amount of distress for this Iowa organization that we so deeply care about,” Wiesley says.

Wiesley gave a list of several reasons for the firing. Those reasons included: her decision to request and accept a salary increase of over $100,000 without board approval; her decision to provide significant raises to a few employees while at the same time cutting employees for financial reasons; she prevented the association auditing firm from providing information for the board to carry out its fiduciary duties. Wiesley says Kilcrease also failed to follow policy when taking bids for projects, she has refused to cooperate with the investigation, and her actions have “caused damage to I.A.S.B.’s reputation.”

Wiesley says the non-profit group is also worried Kilcrease’s salary may have violated I.R.S. rules. I.A.S.B. attorney Nolden Gentry says they will seek to get money back from Kilcrease. He says they will ask her to pay back a sum in the neighborhood of $50,000 that is over and above what she would have made had her salary stayed at its original $210,000 level. Gentry says they have talked with state and local officials about the case, but says Kilcrease has still not talked with them, so there are questions remaining.

Gentry says, “We don’t know what caused her to make that change in her contract without sharing it with the board and getting their approval, and then contacted the entity that handles the salary payments and had those payments increased. We just don’t know.”

Wiesley did say that the preliminary budget for the next fiscal year shows a better financial picture than was earlier thought, and the association should come out in the black. Wiesley says the association wants to move forward to continue helping school districts, and has also voted to decrease its dues by five percent.

Attorney General Tom Miller said today the state may file a civil suit to try to recover the money paid to Kilcrease. “We’re looking into the situation concerning the salary of the chief executive and any related questions concerning the governance or the things that were done there,” Miller says, “But the focus is on the salary.”

As for criminal charges, the F.B.I. is investigating the Iowa Association of School Boards and it’s likely that if criminal charges are filed, they’d be filed in federal rather than state court. Miller says his office stands ready to coordinate with the Polk County Attorney and the feds, though, if state charges make sense.

Also today, the Legislative Council formally bestowed subpoena power on the Legislative Oversight Committee. The committee has asked Kilcrease to testify voluntarily, but she has refused. The I.A.S.B. represents the state’s 361 school districts, 10 area education agencies and 15 community colleges.

Kilcrease’s attorney says she will challenge the firing.