You are here: Home / Health / Medicine / Romney back in Iowa, signing copies of his new book 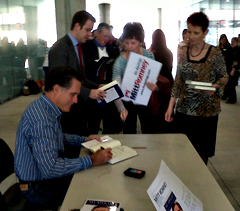 Former Massachusetts Governor Mitt Romney is back in Iowa, talking about his new book and making a few passing references to his 2008 campaign for the White House.

Romney made a noon-hour appearance at the downtown Des Moines Library, speaking for about 25 minutes before signing copies of his book, “No Apologies.”

“It’s nice to be back, particularly on such a sunny day. I understand it’s been sunny and warm all winter, right?  No, there’s been a little bit of Al Gore falling on this area, right?” Romney said, as the audience laughed and applauded.  “A little bit of global warming has come your way.”

Romney briefly outlined his book for the audience and told a few stories about being recognized after he dropped ouf of the 2008 presidential race.  Romney finished second in the 2008 Iowa Caucuses. “It’s good to see good friends again and you know, people — they recognize me here in Iowa.  I must have been on TV a couple of times or two and run a couple of ads,” Romney said, to laughter from the crowd.

Romney made no reference to seeking the 2012 Republican nomination.   Romney answered questions from the audience and none of the questions were about the next presidential contest or about the national health care reform debate.  Romney made a passing reference to it at the beginning of his brief speech.

“President Obama and his friends have looked at health care and said, ‘O.K., there’s a problem there.  We know what to do.  We’ll have government step in and start controlling it.  We’ll put in place price controls and cost controls.  We’ll have government-managed health care.’ Well, if you like how they’ve managed Fannie Mae and Freddie Mac and the Post Office and, you know, and the railroads — Amtrak — why then, you’ll like how they manage health care,” Romney said.

“That’s not the right answer.  If you’ve got a problem in health care, the answer is not to have government play a bigger role, but instead to get it respond like a consumer-driven market. Consumer approaches to health care, that’s by far the better way to solve our challenges.”

Romney, as governor, approved a state-level plan to cover uninsured residents of Massachusetts, a plan that was criticized by some of his 2008 Republican rivals.

Romney is scheduled to give a lecture at Iowa State University this evening.

Click on this audio link to listen to Romney’s noon-time appearance in Des Moines: Romney 23:56 MP3