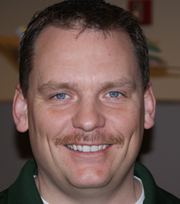 Some law enforcement officers in Dubuque are getting some funny looks from residents these days, but it’s for a good cause. Roughly one-third of the Dubuque Police Department and a few members of the Dubuque County Sheriff’s Department are sporting mustaches.

Investigator Jeff Tupper says the facial hair fad was launched after a handful of investigators were laughing at old pictures of officers with mustaches.

Before long, a mustache growing competition was organized. Tupper says they decided to charge a $5 entry fee and raise money for Dubuque’s annual Polar Plunge, which in turn benefits the Special Olympics.

“It took a few hours before we decided to open it up to everybody (in the police department) and see how much money we can raise…before we knew it, we had a bunch of ugly ‘staches,” Tupper said. The month-long competition ends this week when four female officers will decide the winners of best and worst mustaches. Many of the officers are looking forward to Thursday and shaving the hair off their upper lip.

“One officer was talking about being ridiculed at a college party that he worked at one night,” Tupper said. “I know, me personally, usually when I talk to somebody I have to explain (the contest) because it seems everybody just stares at the ‘stache…if you’re like me, you don’t grow a very good one. It doesn’t look very good.” Thirty-six officers are still in the competition.

Tupper says four officers shaved their mustaches early and paid a $5 fine. Contestants who had a mustache prior to March 1st were required to shave it off and start a new ‘stache from scratch.

Tupper believes the mustache growing competition will become an annual event. A trophey featuring a mustachioed police officer will be passed on from year to year to the winners.