You are here: Home / Education / Legislators wrap up 2010 session 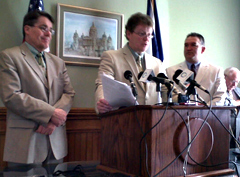 After meeting for a total of 79 days over three months, the Iowa House and Senate today concluded the 2010 legislative session.

House Speaker Pat Murphy, a Democrat from Dubuque, spoke just before the House wrapped up its work at 12:22 this afternoon.

“When we came here in January is was nice and cold,” Murphy said.  “I can’t think of a better time to adjourn than over the noon hour when it’s 72 degrees outside.” The Iowa Senate concluded its work about 25 minutes later.

Democrats hold a majority of seats in the legislature.  It means Democrats control the legislature’s debate agenda and Democratic leaders use words like “success” to describe the work of the General Assembly while Republicans are critical, primarily of the spending plan Democrats developed.

“We continue to spend at unsustainable levels.  As a matter of fact, this is the second-largest spending budget in Iowa history,” Senate Republican Leader Paul McKinley of Chariton says.  “We didn’t do anything to protect the property taxpayer.”

House Republican Leader Kraig Paulsen of Hiawatha says school districts will likely increase local property taxes because of decisions made in Des Moines. “Republicans offered $290 million in savings this session.  Not a single one of those savings was adoped.  I understand Democrats looked at our list and questioned the amount.  Fair enough,” Paulsen says. “But what if we had just adopted 10 percent of those savings — $29 million?  How many of (Iowa’s) 2,500 teachers that are going to get laid off over the course of the next year, how many of them would have been saved from the fate?”

Senate Democratic Leader Mike Gronstal of Council Bluffs says Paulsen’s citing a “doomsday scenario” about teacher layoffs. “I would suggest to you in the coming weeks you will see a number of school districts say, ‘I guess we don’t have to lay off so many people,'” Gronstal says. “I think you will see those number shrink dramatically now that we’ve passed this budget.”

Senate President Jack Kibbie, a Democrat from Emmetsburg, says Democrats are forwarding about $350 million more to K-through-12 schools for the school year that begins this fall. “And so there should not be very many pink slips, so it’s a great victory for us,” Kibbie says.  “We’re all feel good about that.”

House Democratic Leader Kevin McCarthy of Des Moines says in January, Republicans were offering “doom and gloom” predictions about the 2010 legislative session. “Predictions of entire agencies being wiped out, thousands of employees being laid off, an inability to balance the budget, tax increase on the horizon,” McCarthy says. “And here we are, shutting down the session, and we will have…a balanced budget and a recovery on the horizon.”

Gronstal says it’s now up to legislators from both parties will take these arguments to the campaign trail and see how well they sell with voters.