You are here: Home / Politics / Govt / Branstad reveals his plan for creating jobs 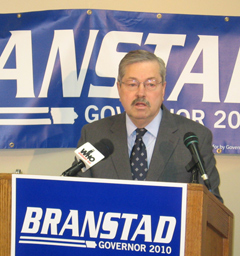 Former Governor Terry Branstad is rolling out his plans for creating new jobs in Iowa as he campaigns for a fifth term in office.

“We’ll increase the number of jobs by 200,000 over the next five years and raise family incomes by 25%,” Branstad said. The Republican gubernatorial candidate’s plan involves a couple of tax cuts.

Branstad proposes a reduction in commercial property taxes in Iowa to less than the Midwest average and cutting Iowa’s corporate income tax rates in half.

According to the Federation of Tax Administrators, Iowa’s corporate income tax rate of 12% is the highest in the Midwest. Branstad says he has a “proven track record” of attracting new businesses and creating jobs.

Iowa’s unemployment rate in February stood at 6.7%, up from 5.3% one year ago. “Unfortunately our present governor, Governor Culver, thinks the way you get more jobs in Iowa is with debt financing and adding more gambling casinos,” Branstad said. “We have seen this has not worked.”

Branstad unveiled his plan today in front of a small group of business owners and supporters at D.M.I. Computer Technologies in Ankeny.