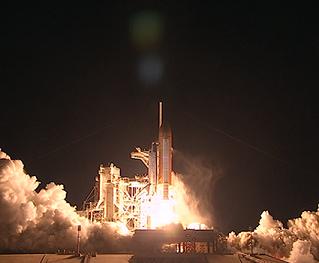 The first and only Iowa State University graduate to see the Earth from orbit is making his second journey into space. Astronaut Clay Anderson and six crewmates blasted off in a spectacular predawn launch aboard the shuttle Discovery early this morning from Kennedy Space Center in Florida.

The shuttle will rendezvous with the International Space Station where the 51-year-old Anderson is scheduled to make three spacewalks. In this Radio Iowa interview from 2007, Anderson says spacewalking is a thrilling experience.

“I go outside the vehicle in outer space and I’m only hanging on by a small, braided wire and a couple extra tethers, and I can turn around and flip around and look at Earth at any time,” Anderson says. “It’s just a spectacular feeling to be floating so unencumbered in outer space in such a dangerous yet such a beautiful environment.”

Anderson spent five months on the space station in 2007. He says one memory he’ll always carry is from his first E-V-A, which is NASA-speak for extra-vehicular activity, or spacewalk. Anderson says: “My first E-V-A of my whole life, I was outside and I was getting ready to start to do some work and I looked and I saw the moon coming over the horizon of the earth and it was one of the most beautiful sights that I’ve ever seen. I actually just sat there and thought, ‘Holy smoke. I can’t believe that I’m doing this.’ It was pretty impressive and it left a great imprint in my mind.”

Anderson is from Ashland, Nebraska, a small community between Lincoln and Omaha, so he considers himself a small-town guy. Anderson says today’s students have more opportunities than ever before and should they pursue their dreams — even into space. 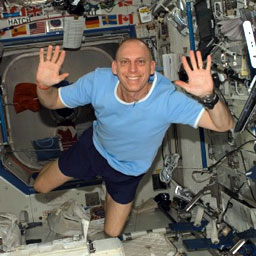 “It doesn’t matter how small a town you come from or what your background is. If you want to do something badly enough and you’re willing to work hard enough, it’s always a possibility. To all the kids in the state of Nebraska and Iowa that go to small consolidated schools and think this is something that’s out of their reach, all they have to do is look to what I’ve been able to accomplish and they should know that they can do the exact same thing if they want to.”

Anderson got a bachelor of science degree in physics at Hastings College in 1981 and a master of science in aerospace engineering from Iowa State University in 1983.

Liftoff of Discovery came at 5:21 AM/Central time. The 13-day mission is among the last to use NASA’s space shuttles, which are being retired later this year.