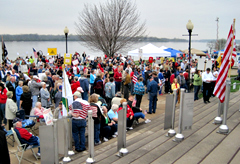 Participants at a TEA party in Bettendorf.

But a couple hundred people who rallied for two hours alongside the Mighty Mississippi had more than excessive taxation on their minds. Protesters spoke out against a variety of government policies, including bailouts and the new health-care legislation.

They say it’s not about Republicans or Democrats but about saving the country. They promise to take their concerns to the ballot box in November.