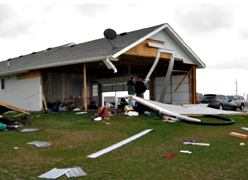 Building damaged by the storm.

The storm that blew through Jasper, Marion and Poweshiek Counties Tuesday was somewhat like a hurricane.

The worst damage, on the west side of Grinnell, included shingles and siding ripped off homes and farm buildings and power poles that were knocked to the ground.

National Weather Service Meteorologist Aubry Wilkins was part of a survey team that toured the three counties. She says wind gusts in Grinnell likely hit 95 to 105 miles per hour, which is like that of a category 2 hurricane.

However, Wilkins notes the peak wind speeds in Grinnell were hit over a shorter duration while a category 2 hurricane would have sustained winds around 100 miles per hour.

The winds on Tuesday knocked several vehicles off Interstate 80. There were no reports of tornadoes. “That’s actually why we went out on the damage survey,” Wilkins said. “We wanted to make sure there wasn’t a tornado. We suspected straight-line winds, but we wanted to double check and make sure. We did end up seeing just straight-line wind damage, which made sense with what we were seeing on radar.”

The winds were accompanied by large hail. Several members of the Grinnell College track team were on a training run at the time and were hit by the hail. They were treated at a hospital for cuts and bruises.