You are here: Home / Human Interest / ISU grad has trouble with repair in space 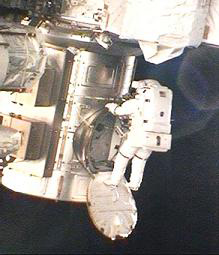 A high-flying repair mission early this morning featured some challenges. Astronaut and Iowa State University graduate Clay Anderson spent six-and-a-half hours on a spacewalk outside the International Space Station working on a repair.

“Houston, it doesn’t look like it’s going back in,” Anderson says, “I think I have it lined up…”

Anderson and fellow shuttle Discovery astronaut Rick Mastracchio were assigned to hook up a new ammonia tank for a cooling system outside the station.

A stuck bolt hung up the job until Anderson freed it using a pry bar, and reported back to Dorothy “Dottie” Metcalf-Lindenburger, inside the station. “Dottie, I got that bolt,” Anderson says. “Clay, you are the man today,” Metcalf responds, prompting Anderson to humbly say, “I get lucky every once in a while.”

The astronauts removed a new ammonia tank from the shuttle Discovery’s cargo bay and disconnected the station’s old tank. The three-stage job will take two more spacewalks for Anderson and his partners during the 13-day shuttle mission. Anderson and Mastracchio finished all of their tasks during the EVA, or extra vehicular activity, about 7 A.M./Central time. It was Anderson’s fourth career spacewalk. He spent five months living aboard the orbiting space station in 2007 and has already amassed more than 24 full hours of EVAs.