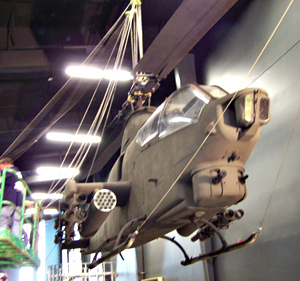 Cobra helicopter being raised to the roof in the Iowa Goldstar Military Museum.

The exhibits at the expanded Iowa Gold Star Military Museum at Camp Dodge continue to grow, including one that will permanently fly above the others.

Workers pulled on chains that slowly hoisted a Cobra helicopter off the floor to the roof of the new museum building, where it was attached in a tilted position as though it is flying.

Iowa guard member John Wynn has flown six types of helicopters, including the Cobra. He’s glad to see the helicopter on display — but didn’t agree with the idea to phase it out of use.

Wynn is a Chief Warrant Officer, and flew the Cobra in Desert Storm. He says the new helicopters have twin engines, and that gives them more versatility and that is why they phased out the Cobra.

Wynn said watching the copter being raised in the museum was a “totally awesome thing.” “It kind of brings a tear to my eye, I love the Cobra,” Wynn says.

The helicopter came from a Waterloo guard unit. He says this particular model is the “S” model cobra, which he flew, and then the upgraded model. Wynn says the last Cobra was an “F” model. He says the differences in the model on display and the final model were this model has a mini gun and a 40-millimeter “chunker,” the last model was upgraded to a 20-millimeter cannon to replace the mini guns and the chunker. 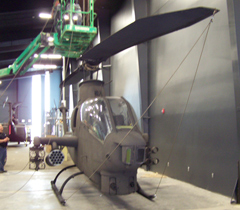 Cobra chopper on the ground waiting for a lift.

Wynn says the Cobra was not very wide to make it hard to see on radar, but says it handled well as it has a “stability control augmentation system” or SCAS. Wynn says the streamlining of the copter makes it a “little squirrely”, so the SCAS would make automatic adjustments as the wind hit the rotor system. He says that allowed the pilot to control it, along with some automatic controls similar to what fighter planes have.

Other new pieces in the museum include a Huey helicopter, and a periscope from a cold war era submarine.