You are here: Home / Human Interest / Des Moines at top of Forbes list of “Best places for business and careers” 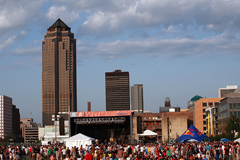 Iowa’s capital city is on top of Forbes Magazine’s  new list for Best Places For Business and Careers. In addition to Des Moines, six other Iowa cities are listed among the top 20 large or small metropolitan areas in the U.S.

Kurt Badenhausen compiled the report for Forbes and discussed his findings in a video posted to the magazine’s website. He says 14 of the 20 cities listed in the rankings for large metros are located in the Midwest.

“We’ve seen a lot of places in the so-called heartland that have held up very well during the recession,” Badenhausen said. “They didn’t get caught up in the housing boom and bust that we’ve seen in places like Florida, in the southwest and in California.”

Des Moines is listed number one on the list for best places for business and careers after being listed seventh last year. “Des Moines has very low business costs, 15% below the national average when you look at labor, taxes and energy,” Badenhausen said. “They also have a very educated labor supply. Ninety-two-percent of the population has a high school degree and 33% has a college degree, which is in the top quarter of all metro areas.”

The rankings of best places is also based on past and projected job growth, income growth and quality of life issues like crime and cultural and recreational opportunities. The Forbes article highlights some of Des Moines’ largest employers – including Wells Fargo, Principal Financial and Nationwide Insurance.

Des Moines is followed on the list by Provo, Utah and Raleigh, North Carolina. Omaha is ranked 7th and Cedar Rapids is 13th on the list. Forbes also compiled a list of Best Small Places for Business and Careers. Sioux Falls, South Dakota tops the small metro rankings followed by Iowa City. Other Iowa cities on the list include Waterloo (13th), Sioux City (14th), Dubuque (15th) and Ames (17th). Kay Snyder is a spokesperson for the Iowa Department of Economic Development.

“Rankings like these give well-deserved exposure to Iowa,” Snyder said. She says the state and the cities will use the Forbes report in future marketing materials.