You are here: Home / Outdoors / Prairie grass and wildflower seed going out to counties 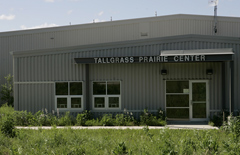 Nearly 20,000 pounds of prairie grass and wildflower seed are being distributed to road crews in 45 counties across Iowa this week. The native Iowa seeds are produced at the Tallgrass Prairie Center at the University of Northern Iowa in Cedar Falls.

“You really don’t want to be doing a bunch of mowing with the native plants,” Henderson said. “We pretty much mow the shoulder…these plants are very self-sustaining.” There are conservation benefits as well. The deep roots of the plants help control soil erosion.

“The native plants also help reduce storm water runoff. This is going to be part of the solution for reducing our flooding someday,” Henderson said. The seed mixes include over 13,000 pounds of prairie grass and nearly 6,000 pounds of wildflower seed. Henderson says it’s enough seed to cover roughly 1,000 acres along county roads.

The planting of prairie grasses and wildflowers along Iowa’s county roads has been going on for two decades. “We estimate that in that time, we’ve planted roughly 20,000 to 25,000 acres of county road right-of-way,” Henderson said. The seed for this year’s effort is valued at $225,000.

The Tallgrass Prairie Center receives funding from the Transportation Enhancement Program through the Iowa Department of Transportation.