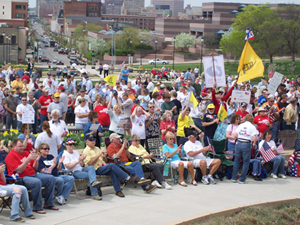 About 2,000 “Tea Party” activists turned out for a “Tax Day” rally on the statehouse grounds in Des Moines. Charlie Gruschow, chairman of The Des Moines Tea Party, was the event’s main organizer.

“The Tea Party movement is a venue, if you will, to get people to grow together, to move together, to take back this country and that’s what our goal is. We’re going to take it back from the radical, socialist, progressive party and people in congress,” Gruschow said, as the crowd cheered.

“And I believe that every major problem we have in America today is because of socialist, progressive, liberal policies and I’ll stand on that statement.”

Nearly two dozen people were invited to stand behind the microphone and speak or sing to the crowd during the more than three-hour-long rally. Chuck Hurley of the Iowa Family Policy Center led the crowd in prayer shortly after noon. “Here we are at a dark moment in our nation’s history where much of our founders’ vision has been trashed,” Hurley prayed. “Father we turn back to you. We confess our own sins of apathy, but no more father. Might we never cower again.”

Doug Burnett of Des Moines said Tea Party activists will no longer tolerate “the arrogance and broken promises” that have been made by the “tone deaf power brokers” in the nation’s political parties. “First and foremost, we’re not a political party. We’re a movement and frankly that scares the hell out of anyone that opposes our principles,” Burnett said.

Dozens of American flags fluttered in the strong breeze alongside a few “Don’t Tread on Me” flags and home made signs. Walter Golebiewski, a Polish immigrant who runs a hotel in the Des Moines area, said the Tea Party movement was attracting criticism because it has become the face of modern-day conservatism.

“They want to put a sticker on our faces that we are facists or whatever I have heard and this is big lie because as I feel and I observe, this is the (most) pure and moral movement in America for the last century,” Golebiewski said. Gruschow, the chairman of The Des Moines Tea Party, urged the crowd to do more than just attend today’s rally. 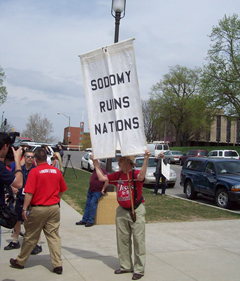 “You’ll be enthused, informed, motivated and go back into your area, your homes, and become Tea Party activists,” Gruschow said.

A protestor wearing a shirt that said, “Jesus Is The Standard” walked around the outskirts of the crowd with a huge poster that said “Sodomy Ruins Nations.” Gruschow denounced the man.

“There is an organization and a group of people that their sole purpose is to disrupt Tea Parties across America,” Gruschow said.

“We’re a peaceful movement. You know, we have gained so much attention and so much popularity that the only way they can take us down is to try to divide us and make us look like what we really aren’t.”

Tea Party activists yelled at the man to leave, but he walked back and forth along the sidewalk as Tea Party members wearing security gear took the man’s picture.