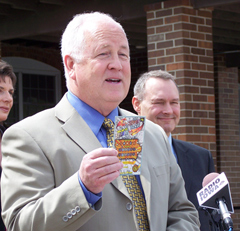 The Iowa Lottery and the Iowa Tourism Office are teaming up for a summer promotion that seeks to encourage people to travel to events across the state.

The lottery and tourism office tried the co-promotion for the first time last year. Landess says they had a great response and some of the attractions from last year’s promotion said they had increased traffic. She says Fun City in Burlington for example said that 86% of the coupons redeemed came from outside the Burlington area. 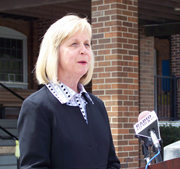 The bill creating the lottery was signed on April 18th 1985. Iowa Lottery C.E.O., Terry Rich, says they’ll give away prizes at the 25 state events for people who bring a non-winning silver scratch off ticket.

Rich says they will also have tourism discounts available for people who bring a silver ticket. Landess says it was tough picking out 25 events for the drawings. She says among the events there are the First Friday Art Walk in Fairfield, the Iowa Arts Festival in Iowa City, The Hy-Vee Triathlon, the Knoxville Nationals, the Cedar Rapids Freedom Festival, the America’s River Festival, Party in the Park at Charles City, and the great Okoboji Wingding. The final event of the promotion is the Iowa State Fair in August. The first lottery tickets were sold at the Iowa State Fair. For more information on the events, visit www.traveliowa.com.