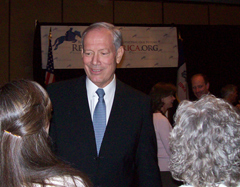 Former New York Governor George Pataki is in Iowa today, urging Iowans to sign a petition that calls for repeal of what he calls “ObamaCare.” Pataki spoke to about 50 people in a hotel ballroom in Des Moines over the noonhour.

“You know, I was happy as a private citizen,” Pataki said. “I served 12 years as governor of New York and it was a tremendous privilege, but when I see what is happening in Washington over the course of the last not quite year and a half, like most Americans I believe we are seeing a government that is dramatically headed in the wrong direction.”

Pataki is chairman of a new group called “Revere America” that is spearheading a petition drive with the ultimate goal of repealing the health care reform plan President Obama signed into law this spring.

“I don’t think there’s a person in America who looks at this objectively and says, ‘We’re going to have all this new coverage and somehow it’s going to cost less.’ It’s going to cost more,” Pataki said. “The only way it could possibly cost less is if we can’t get the health care that we need and deserve and that is what I fear most about this bill.”

Pataki visited Iowa before the last presidential campaign, but decided against seeking the Republican Party’s presidential nomination. Pataki was asked by a reporter whether he was considering a bid for the White House in 2012. “You know you guys always are just interested in that sort of questions,” Pataki said.  “And I love being a private citizen.  You know there will be a lot of good people out there in 2012, but I don’t think we can wait two years to take back this government.”

Pataki told another reporter it was time to “hoist ObamaCare on a stick.”

Click on the audio link below to listen to the entire Revere America event in Des Moines which featured Matt Strawn, chairman of the Republican Party of Iowa; Brenna Findley, GOP candidate for state attorney general and Iowans for Tax Relief president Ed Failor, Junior before Pataki addressed the crowd.  The mp3 runs 35 minutes: