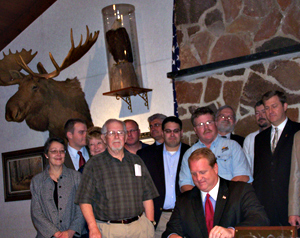 Governor Chet Culver signed a bill today at the Izaak Walton League in Des Moines that sets up a trust  fund that’ll be voted on this fall  that will constitutionally protect money dedicated to natural resources projects.

State Representative Paul Bell, a Democrat from Newton, says a lot of people worked over the past four years to get the bill passed.

“I do believe that the bill the governor is going to be signing today is going to be a legacy for our children and grandchildren in the future,” Bell says, “It’s going to set up clean water, air, land, better fishing, sustainable hunting, fishing, trials, it’s a great bill.”

Bell say he’s confident Iowans will vote for the measure and he looks forward to the measure passing in November and then the legislature can deal with what comes at that time. Senator Dick Dearden, a Democrat from Des Moines, also supported the bill. “You know the one thing I see in there, it just takes care of every outdoor activity we can think of ’cause this committee sat and worked and worked and worked,” Dearden said.

Culver talked about the impact of the bill. “If Iowa chooses yes to this amendment, the bill I am signing today will ensure that the taxpayer money intended to support parks, trails, fish, wildlife, and agricultural lands, will be protected,” Culver says. If voters approve the issue in November, three-eights of a cent from a one cent sales tax increase would be dedicated to the fund.

Culver, a Democrat, told reporters after the signing that this is not about a tax increase. “What really is important, is that this bill sets up the mechanism to make sure that we protect our wildlife in terms of conservation efforts in the future,” Culver says, “so this is really the first step and it has nothing to do with a tax increase at this time. It’s only responding to the wishes of the people of Iowa to ensure that we have a sustainable funding mechanism in the future.”

Culver says the method for getting money in the fund is something that will be decided later. Culver says this is a step forward to set up the structure to protect natural resources, and he says 92 state representatives and a unanimous vote in the Iowa Senate said this is an important step for the future. If the measure is approved in November, it would go into effect in January 2011.