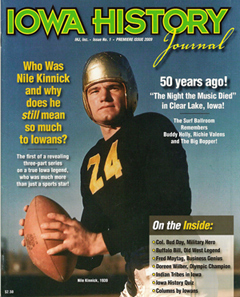 Iowa’s newest history magazine is now in its second year of production. Mike Chapman is publisher of the Iowa History Journal.

The eight issues released so far have included over 100 articles and featured some famous Iowans or Iowa landmarks on the cover.

Chapman, who has authored 21 books, says he wants the magazine to uncover stories from the past that Iowans might not know about.

“Our concept is that history is exciting and fun and has a lot of energy to it,” Chapman said. “It has to be taught that way and has to be written that way.”

Chapman is a native of Waterloo who spent 35 years in the newspaper business and is also the founder of the Dan Gable International Wrestling Institute & Museum in Waterloo. The Iowa History Journal is based in Newton. The March/April issue includes an article about V.T. Hamlin – who grew up in Perry. In 1932, Hamlin created the comic strip Alley Oop while working at the Des Moines Register.

“He created this muscular, time-traveling caveman who rode a dinosaur and had all these incredible exploits and adventures,” Chapman explained. “It’s seen in over 600 daily newspapers around the world. It’s still very popular. It plays in quite a few papers in Iowa. I know the Newton Daily News, when I was the publisher, we ran it and it’s still running there today.”

A one year subscription to the Iowa History Journal, which includes six issues, costs $18.95. Chapman was a guest on the Iowa Public Radio program Talk of Iowa.