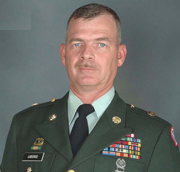 A soldier from northeast Iowa has died in Afghanistan. Command Sergeant Major John Laborde of Reinbeck died Thursday in Afghanistan. According to the military, Laborde died from injuries he sustained in a “non-combat related incident” at the Kandahar Air Field in Afghanistan.

Laborde and the other 50 soldiers from that unit have been providing management services to other units deployed in the region.

As a command sergeant major, Laborde was the highest-ranking enlisted soldier in the unit.