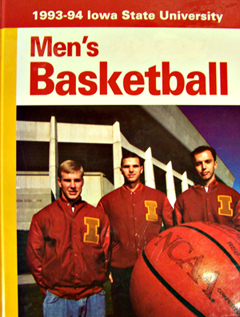 Fred Hoiberg was introduced this morning as the new head coach of the Cyclone men’s basketball team.

“It’s great to be home,” Hoiberg, an Ames native and former I.S.U. star, told a crowd of media and supporters who gathered in Ames for this morning’s news conference. “…I haven’t slept or eaten in two days because of the excitement I felt.”

Hoiberg paid tribute to his Ames High coach who was in the room and noted it was a homecoming for both him and his wife, who is also an Ames native. “We saw the opportunity to come home and make our dreams come true,” Hoiberg said. “…Here I am, realizing my dreams.”

Hoiberg called Cyclone enthusiasts the “greatest fans on the planet” and Hoiberg said he wants to bring “Hilton Magic” back, a reference to the raucous atmosphere of the Cyclone’s home court in Hilton Colesium which was a sold-out arena during Hoiberg’s years as a Cyclone.

Jamie Pollard, Iowa State University’s director of athletics, said Hoiberg contacted him four years ago about the head coaching slot , but the time wasn’t right. The job went to then U.N.I. coach Greg McDermott. McDermott left I.S.U. to take the job at Creighton.

Last Sunday, Pollard contacted Hoiberg to see if he was still interested in the job. According to Pollard, Hoiberg “told me not only do I have interest, Jamie, I have a plan.”

Pollard said Hoiberg had learned from some of the “best coaches out there” including Larry Brown, Larry Bird, Flip Saunders, Kevin McCale, Tim Floyd and Johnny Orr.

“He convinced me that although he hasn’t coached officially, he has coached because he’s learned what great leadership is all about,” Pollard said.

Pollard announced Hoiberg is retaining the team’s lead recruiter, T.J. Otzelberger. In addition, Hoiberg will keep Jeff Grayer, another I.S.U. star of the past, on staff as an assistant as a “role model” for the players according to Pollard.