You are here: Home / Health / Medicine / Husband and wife help patients heal with music and conversation 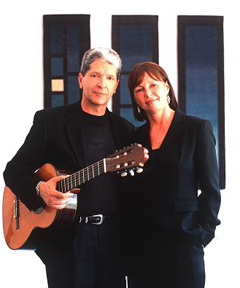 A husband and wife are touring Iowa health care facilities in hopes of helping cancer patients heal through artwork, music and conversation. Robert and Rebecca Bluestone are both internationally recognized for their art. Rebecca weaves large, colorful tapestries, while Robert is a classical guitarist.

He says they’re interacting with health care providers, including doctors, nurses, hospice caregivers and administrators, while offering patients relief from their worries through multimedia concerts — meeting one-on-one with some them. “Rebecca is a cancer survivor so her having conversations with people, having gone through it herself and me as a caretaker, it’s very meaningful for folks,” Bluestone says.

“We’ve done this all across the country.” As a two-person team, he says, they are passionate about unlocking the powerful connection between creativity and the health care environment. “We have found it to be extremely effective,” Bluestone says. “We’re not saying we’re curing people but we can give them a kind of succor. We can give them a kind of relief. In the moment, they can maybe put aside their concerns for just a little bit and that is conducive, we think, to healing.”

While Rebecca is an ovarian cancer survivor, she was a caregiver to her mother, who died of breast cancer. Robert was Rebecca’s caretaker during her treatment and recovery. They are sharing their artistry with patients and their families in settings Robert says are committed to health and well-being.

“It’s a reason to be positive because we’re seeing a ground-level change in what health care is about,” Bluestone says. “We’re seeing a much more holistic approach to treating the whole patient, dealing with the problem on a family level. This tour is primarily about cancer and cancer affects the whole family.” He says their talks include one workshop that’s specifically for caregivers, reminding them to care for themselves, too.

The University of Iowa’s Hancher Auditorium, Holden Comprehensive Cancer Center and College of Public Health have collaborated to create the Bluestones’ tour, called “Iowa Arts and Health Care Project — A Journey through Iowa.” The Bluestones are from New Mexico. The project was nearly a year in the making.

The Iowa tour started April 19th and is taking them to facilities in Spencer, Algona, Des Moines, Grinnell and Davenport, with a final concert in Iowa City on May 8th as part of the annual Blue Rose Gala. Learn more about the Bluestones at www.wovenharmony.com.