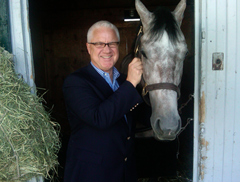 One of the horses running for the roses in tomorrow’s Kentucky Derby is owned by a group that includes 10 Iowans.

The group, also known as Derby Dreams, was formed with the goal of landing a horse in the Kentucky Derby.

This will be the 136th running of the Kentucky Derby – and for only the second time in history – will involve a horse owned by Iowans. The odds of landing a horse in the Derby are said to be 1,865-to-1. “The odds are overwhelmingly against you,” Crawford said. “It’s such a dream come true that we were able to do it…it’s just so exciting.”

Crawford, who’s owned horses for more than three decade, bought eight colts at an auction in September 2008. The most expensive horse, at $105,000, turned out to be Paddy O’Prado. “He was a really big, gangly looking yearling,” Crawford recalled. “He didn’t look finished-out or athletic at all. But, in your minds-eye, you could see that if he matured he might really turn into that kind of horse. And boy has he…it was just one of those fortunate choices because he’s really turned into a monster.”

The horse with the Irish name displayed a bit of luck this week when he drew the most coveted starting position. Paddy O’Prado will leave the gate from the 10 hole, the post position which has produced the most Kentucky Derby winners. In addition, the favored horses, Lookin at Lucky and Sidney’s Candy, drew the two worst positions – posts 1 and 20.

After Crawford purchased Paddy O’Prado and the seven other yearlings in 2008, he invited 20 friends to join the partnership called Derby Dreams. Ten people agreed to join Crawford, who could’ve pursued the dream alone. “I’m a lot happier this way because we’re having so much fun together,” Crawford told Radio Iowa from Louisville, Kentucky. “I love all of these folks and we’re having a great time. We’re going to have over 300 people here this weekend cheering Paddy O’Prado on and that doesn’t happen if you don’t have a lot of partners.”

Thousands of Iowans will be cheering for Paddy O’Prado while watching the Derby on TV. “We’ve wanted this to be Iowa’s horse all along. It’s not just our horse,” Crawford said. “We hope it gives people a lot of happiness and enjoyment this weekend. We hope to make them proud. I think the horse is up to it.” One person who believes the 3-year-old colt owned by Iowans is capable of winning the Derby is famed jockey Kent Desormeaux. He’ll be riding Paddy O’Prado.

Desormeaux has won more Derbies (three) than any active jockey in the world. “To have him to pick our horse tells you quite a bit about the fact that we have a legitimate chance on Saturday,” Crawford said. The only other horse owned by Iowans to race in the Kentucky Derby was Blumin’ Affair. He finished third in 1994.