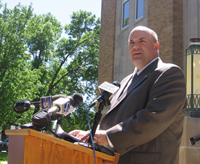 Officials say their investigation indicates a Drake University student who died last week shot himself in the head. Nineteen-year-old Benjamin Backstrom was found on a bridge south of Des Moines, along Highway 65/69 near Indianola, early last Tuesday morning.

Officials said it was a “suspicious death” and they began a homicide investigation. However, officials say late last week their investigation began to shift away from homicide “to the possibility that Backstrom’s injury may have been self-inflicted.”

State officials held a news conference Monday afternoon in Indianola. Michael Motsinger, a special agent with the Iowa Division of Criminal Investigation, said a handgun is missing from Backstrom’s parent’s home. However, a search of the Middle River below the bridge and of Backstrom’s car have failed to produce the weapon. Motsinger says surveillance video shows Backstrom was alone in his vehicle when he parked it at Summerset State Park at 12:40 a.m. last Tuesday.

“We also know three witnesses called in and said they saw Mr. Backstrom walking on Highway 65/69 by himself and walking onto the bridge by himself,” Motsinger said. “There’s also the handgun that’s missing from the family’s residence that Ben himself had stated that he took with him. We’re still looking for that handgun.”

Backstrom revealed he had taken the handgun in one of several letters he left behind. He claim the gun was for personal protection. Backstrom’s parents issued a press release saying their son had either witnessed a crime or was made to believe that he had and was threatened not to contact police. Ben wrote that he was instructed to take his own life on the bridge to ensure his family’s safety.

Motsinger says the D.C.I. will continue to investigate, but there’s no “credible information” that Ben was ever threatened. He says it’s unclear if Ben may have “staged” the threats.

“We’re looking into that,” Motsinger said. “That’s why we’re following up…whether or not to classify it as staged…we’re just following up on all our leads to make sure everything is covered.” Motsinger revealed that Backstrom was found with zip ties around his wrists with his hands in front of him. In-store video shows Backstrom purchasing the zip ties just a few hours before his death.

Motsinger says the case is not entirely closed.