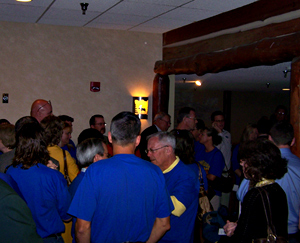 The largest contingent of speakers at today’s Racing and Gaming Commission hearing on new gambling licenses came from Webster County.

William Dawn, who leads a foundation in Fort Dodge, spoke out against the casino that is proposed for the city.

“There are many reasons not to grant a Webster County license. There are at least three that may be of the greatest importance to you as commissioners,” Dawn said. “One — basic facts are in dispute. Two — patterns of deceptions have emerged. And three — an important rule has been violated.”

Dawn charged that the facts of a study on the economic impact of a casino are flawed because the study didn’t take in upcoming changes in the region. Electrolux in Webster City, one of the largest employers in the area, will close later this year and 850 people will lose their jobs. A yearly payroll in excess of $30 million will disappear. “The impact on potential casino revenues has not even been estimated,” Dawn said of the plant’s closure. “Look at the bottom line, tens of millions of dollars are about to disappear from the immediate area of the Fort Dodge Casino. Who will replace them?”

Dawn argued it is deceiving for casino backers to say the project has large community support. “The idea that the citizens of Fort Dodge and Webster County are solidly behind a casino was given a strange test by the backers of the local plan. They persuaded the city manager of Fort Dodge to give city workers a paid holiday to attend your site inspection,” Dawn told the Racing and Gaming Commissioners.  “This created a controversy covered by every T.V. station and daily paper in Iowa. What you commissioners could not have known when you came to visit Fort Dodge is that fewer than 20 percent of Fort Dodge workers chose to attend the rally.”

Dawn also questioned whether campaign contributions made by Fort Dodge casino backers to Governor Culver were illegal.  “These contributions, often made simultaneously and on the same dates, clearly transgressed rules that specifically forbid sponsoring organizations making donations to candidates or the political committees — whatever the original source of the money may’ve been,” Dawn charged.

“A casino for Webster County provides exactly the kind of boost our citizens need in working toward our vision,” he said. “It provides many of the tangibles we are looking for in jobs, visitors, quality of life and revenue. How does the public library fit in? We are one of the many important community assets that can benefit from a broader tax base.”

Tim Burns, the chief financial officer of Decker Trucking in Fort Dodge, said the casino would serve as an “anchor” for future economic growth in the area.  “Our region has been left without the casino benefits that other regions have been allowed to experience,” he said. “This, our second effort (at obtaining a license), offers you as commissioners an opportunity to see the vast amount of support and need that Webster County has for a casino.”

Burns told the commissioners the casino would be an entertainment venue that could help Fort Dodge keep young people from leaving the city.

“Studies undertaken by our city have shown that entertainment is lacking for  young adults which makes it difficult to recruit them for our businesses,” Burns said. “Our young adults do not stay.  Some move for lack of job opportunities. However, many leave for the lack of activities for single and young adults.”

Supporters of the Webster County casino wore blue shirts that had the slogan, “Webster County All In,” printed in gold letters on the front of the shirts.