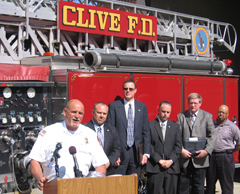 Public safety officials are encouraging Iowans who have old smoke alarms to replace the devices with new, dual sensor detectors.

State Fire Marshal Ray Reynolds says smoke detectors should be replaced every ten years and Iowans should consider equipping their homes with the latest in smoke detector technology.

“You don’t still operate the 1975 technology in your T.V. or 1975 car, you got a newer model,” Reynolds said. “So, the dual sensor provides optimum protection. If you have a working smoke detector in your home, that’s the priority for us – but as you go to replace those detectors, you should replace them with the dual sensor detector.”

“A slow, smoldering fire such as a cigarette in a bed or seat cushion can be detected by ionization type detectors. For flare-up type fires with flames such as a cooking fire, there’s photoelectric type detectors. Now, these are combined into one smoke alarm,” Collins said. Iowa enacted a new requirement on April 1 that newly-constructed homes and apartments be equipped with dual sensor smoke detectors.

Collins and Reynolds made their comments this week at a press conference at the Clive Fire Department. Reynolds said smoke detectors are credited with saving at least 22 lives in Iowa this year. Nine Iowans have died in structure fires since January 1 and at least five of those deaths occurred in a home without a working smoke detector.