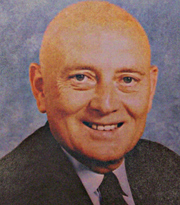 A former president, a U.S. senator, a congressman and other Iowa politicians gathered in a Des Moines church today for the funeral of former Iowa Democratic Party chairman Ed Campbell.

Campbell, who died last week at the age of 75, served as an aide to Iowa Democrat luminaries of the past like Harold Hughes and John Culver. In 1977, Campbell became party chairman and helped solidify the status of Iowa’s first-in-the-nation Caucuses.

His younger sister, Christine Lantis, was the first to eulogize Campbell.  She said Campbell had convinced his much-younger sisters that he did background checks on all their boyfriends. “Lisa always believed every seven-year-old always had tea parties with Governor Hughes,” Lantis said.

Long-time friend Dan Miller called Campbell a larger-than-life figure. “Behind the sometimes gruff demeanor and the oftentimes colorful and occasionally acerbic tongue there lived the soul of an angel whose generosity flowed through a heart that was a mile wide and a mile deep,” Miller said.

Former President Bill Clinton was the closer. “I know Ed Campbell had a gentle, good, kind side, but he was brilliant at hiding it,” Clinton quipped to open his remarks, getting gales of laughter from the congregation.  “I mean, the first time I ever met this guy he leans into me with this big bald head and these sharp features and these piercing eyes.  I actually thought I had run into somebody out of Star Wars.”

Campbell endorsed Clinton early in the 1992 presidential race. Clinton lauded Campbell as a “political genius” who considered politics a “noble” calling. “I think it’s well to remember when we’re going through tough times that this is the longest-lasting free government in human history because we had a few people with the kind of gifts Ed Campbell had and who realized there was nothing bad about politics,” Clinton said. “It’s the price we paid for our liberty. It was an honorable way to live a life.”

Clinton called Campbell tenacious, partly because of the political battles he waged, but also because Campbell battled alcoholism and cancer. “He suited up every single day of his life and he played the game, just the way you’re supposed to,” Clinton said.

Lobbying partner and long-time friend Ned Chiodo said the crowd who gathered for today’s funeral looked like the “political history” of Iowa. “Every single one of you have an Edward story and they’re terrific, but I want to assure you Edward had a story about every one of you,” Chiodo said, drawing laughter from the congregation. “And I took copious notes.”

Campbell’s wife, Bonnie, served one term as Iowa’s attorney general before running for governor in 1994 and then working in the U.S. Justice Department during the Clinton administration. Monsignor Frank Chiodo spoke of the Campbell’s 35-year marriage. “The tenderness and the care they shared was a blessing to witness,” Chiodo said.  “…They were not just spouses.  They were best friends and that’s a beautiful thing.”

The priest said beyond Campbell’s “gruff exterior” there was “a marshmallow inside.”

Click on the following links to listen to today’s messages, posted in the order they were delivered: