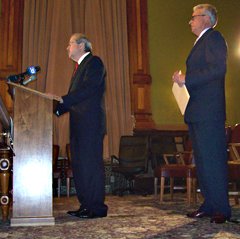 Terry Branstad talks as Auditor David Vaudt stands behind him.

“You know, when I take a look at candidates I’m taking a look at whether they can handle the fiscal complications that we’re addressing right now,” Vaudt says. “We’ve got a real financial mess that we have to address and someone needs to first realize that and then put forth a plan to get us out of this.”

Vaudt met with each candidate, but he says none of them — including Branstad — directly asked for his endorsement. “I took the independent approach of evaluating each candidate and selecting the candidate I thought was best qualified in leading Iowa in this very challenging time,” Vaudt says.

Branstad calls it the “most important endorsement” any candidate for governor before the June 8th primary. “We have a state auditor who’s a (Certified Public Accountant) and he’s always called it like it is,” Branstad says.  “He has criticized the Republicans when they controlled the legislature as well as the Democrats and Governor Culver for the way they have mismanaged the finances of the state.” 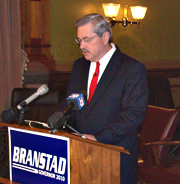 Branstad’s critics say he significantly increased the size of the state budget and he raised the state gas tax and sales taxes during his tenure as governor.  Vaudt is jumping to Branstad’s defense, saying that’s not the entire story. “So much of what is happening today is we tell the public what we want them to know, not what they necessarily need to know to make the proper conclusions and you can count on me to always give you the full feedback — full, honest feedback, so that you as the public can make the right conclusions and that’s all I’m asking for is to make sure that whenever we put out somebody’s record, let’s talk about their full record,” Vaudt says.  “Let’s put it all on the table.”

Branstad acknowledges that in his early years as governor when Democrats led the legislature there were some “valid criticisms” of his spending practices, but Branstad says those were corrected by budgeting reforms which were passed in 1992.  Branstad was Iowa’s governor for 16 years — from January of 1983 ’til January of 1999.

Branstad and Vaudt made their comments this afternoon during a statehouse news conference.  Click on the audio link below to listen to the entire event: