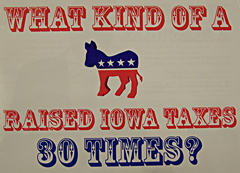 Branstad, a Republican, is seeking a fifth term as governor and a group called “Iowans for Responsible Government” has sent mail to Iowa Republican voters and is running ads critical of Branstad’s fiscal record. “It’s a front group,” Branstad says.  “They don’t even identify who is paying for it.”

The mailing from the group leads off with this question:  “What kind of a Democrat raised Iowa taxes 30 times?”  The inside headline reads: “It wasn’t a Democrat.  It was Terry Branstad.”  Branstad says that’s not the “whole story.”

“It is, again, taking some things out of context and not pointing out the fact that when I was governor we cut taxes and we restored fiscal responsibility and we got the budget balanced for the first time on generally accepted accounting principles,” Branstad says.

Branstad cites his actions as governor which cut state income taxes by 10 percent, across-the-board and eliminated inheritance taxes for children and grandchildren. The ad cites Branstad’s actions which raised the gas tax “by 54 percent and the sales tax twice — by a total of 67 percent.”

“We’re not going to let them get by with that,” Branstad says.  “…I find it kind of interesting that you have a liberal trial lawyer who was chairman of the Democratic Party and who has contributed to Chet Culver’s campaign who is now running these misleading ads.”

Inside of mailer that attacks Branstad's record.

The lawyer Branstad is referring to is Rob Tully, a former Iowa Democratic Party chairman who is listed on paperwork filed with the Internal Revenue Service as the group’s “custodian.”  Branstad accuses Tully of trying to “fool Republican primary voters with misinformation.”

“We’re not going to let them get by with that,” Branstad says, “because we’re going to tell them the whole story.”

According to Branstad, the group’s ads are a signal Democrats believe he is the only candidate who can beat the incumbent Democratic governor. Branstad is demanding that the group attacking his record reveal who has contributed to the effort, but the next disclosure report isn’t due ’til after the June 8th primary.  “Iowans for Responsible Government” operates under tax rules for groups that are formed “for the purpose of influencing the selection” of candidates for public office.