The weather dampened a staged event by the People for the Ethical Treatment of Animals during the noon hour in downtown Des Moines. Two PETA volunteers pretended to take a shower in what organizer Amanda Fortino says was an attempt to prove a point about water use.

“We want people to know you don’t have to give up showering to have a clean conscience about the amount of water you’re using, instead you can just go vegan,” Fortino explained, “it takes nearly 2,400 gallons of water to produce just one pound of beef. So you actually save more water by not eating the one pound of beef than you would by not showering for six months.” 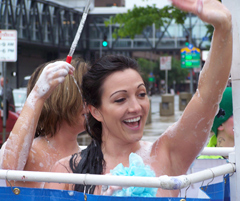 The plaza where PETA set up the display is normally filled with people during the noon hour, but rain showers left only passing traffic to see the message. Fortino says she was disappointed with the weather, but says they decided to go forward to get their message out. She says people don’t have to eat meat, even in a top agriculture state like Iowa.

“It’s never been easier to go vegan, you can walk into local grocery store and find a vegan option. It’s in high demand and people really are starting to be more aware of what they can do for the environment and helping to save animals,” Fortino said. Although they appeared to be to passersby, the women in the makeshift shower were not fully nude.

They did elicit some honking horns and one man riding in a truck rolled down his window and said he was dirty and could use a shower too. PETA holds these types of events on an annual basis.