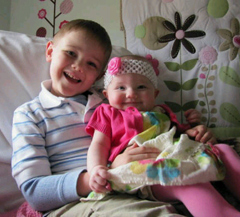 Carson and Claire DeJoode from Easter of this year.

Police in Ankeny say it could take several weeks to complete an investigation into a crash that killed two young children. The May 6th crash has also left parishioners of a Cedar Rapids church in shock.

Heather DeJoode was driving a minivan that was struck by a pickup that drove through a stop sign. DeJoode remains hospitalized in critical condition.

Two of her children, 5-year-old Carson and 5-month-old Claire, died in the crash. Her 3-year-old son Chase was injured. Reverend Martha Rogers of Christ Episcopal Church says Heather and her husband Troy were married at the Cedar Rapids church.

“Heather is in pretty serious condition. She has survived two reconstructive surgeries, a pelvic reconstruction and a jaw reconstruction,” Rogers said. Heather DeJoode grew up in Cedar Rapids. Her parent, Mark and Sandy Eccles, still live there and attend Christ Episcopal Church. Reverend Rogers says the family is overwhelmed with grief and sorrow, but they are thankful for the outpouring of support.

“If we want to honor this family in their time of chaos and tragedy, we need to honor them by holding gently to our lives and their lives and just be appreciative of every moment we have,” Rogers said. Christ Episcopal Church is accepting donations for the family. The DeJoode family says Heather is unconscious and remains listed in critical, but stable condition.

Reverend Rogers says Heather’s husband Troy wants to emphasize the importance of organ donation. He donated organs of his two children who died and that has helped six other people. Police identify the driver of the pickup as 46-year-old Kevin Dalasta of Norwalk. Court records show Dalasta has been charged more than a dozen times with traffic-related offenses.